Skip to content
Our editors independently research, review, and identify the best products. We may earn a small commission on purchases made from links on this page. Learn more 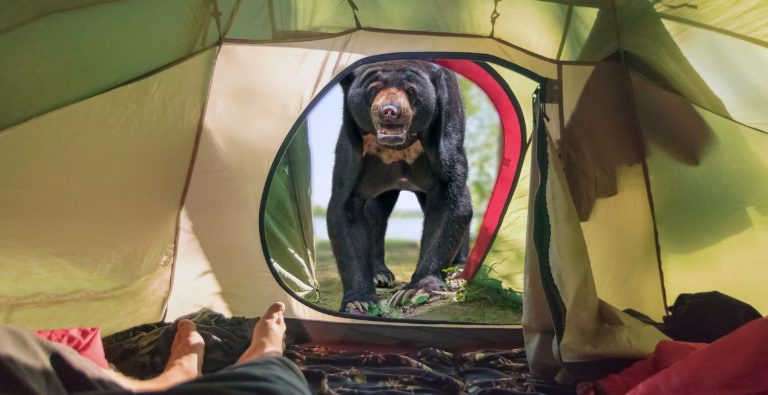 Camping in bear territory requires a good amount of planning ahead, and you might want to think twice before entering the backcountry with no personal protection or knowledge about bear behavior.

In most states bear encounters are very unlikely, even when travelling through remote areas. Most bears will sense you and take off even before you get sight of it, but in some cases it may feel threatened by you and/or start searching for food at your campsite.

So, what should you do if a bear is suddenly rustling outside and searching for food? How do you prevent it from ripping the tent apart, and how do you deal with bear encounters?

Read on to find out how to stay calm when a curious bear decides to join your party.

With this guide we assume that you’ve already taken proper safety precautions (as recommended by NPS.gov), and made sure that:

Bears can be unpredictable. While bears are usually timid creatures that would flee by the sight of any human, some act differently. You can’t always count on them, so make sure you come prepared and understand the dangers and safety precautions needed when camping in bear country.

Best way to deal with a bear outside your tent

The number one reason why bears enter a camp ground, is because they’re searching for food – they usually don’t consider humans food, but camp grounds can become an open invitation for bears if they learn to associate your presence with food being scattered around the area.

In general, bears are attracted by anything they consider eatable, such as any human foods, pet foods, garbage, cookware, canned beverages, cosmetics, insect repellents, lotions, bird seeds, and more.

If you encounter a bear outside your tent, it will most likely snoop around for a while before going away – especially if you took proper safety precautions and secured foods in special bear resistant food storage boxes at the campsite, and safely disposed of any garbage.

However, IF the bear decides to stick around and gets too close to the tent, have your bear spray ready for use.

You must understand that predatory attacks are quite rare, and most bear attacks happen because the bear is defending itself and/or its cubs.

Use your voice to make the bear aware of your presence

If a bear is taking its sweet time to poke around, or you fear that it may become too curious and start pawing at your tent, make some noise to announce yourself.

The human voice is often enough to scare a curious bear away, but don’t overdo it by screaming or yelling. Also, don’t make any movements just yet, but remain calm and talk gently to whatever bear is roaming the camp ground.

Usually, none of this is necessary, because the bear is most likely already aware of your presence as it enters the camp ground.

So keep calm and keep listening to its movements, if you’re able to see it, keep looking at it and have a visual confirmation that it’s moved on.

If the bear doesn’t go away and keeps poking around after you announced yourself, it could be a good idea to slowly get out of the tent in order to assess the situation and see what kind of bear you’re dealing with.

However, make sure you don’t surprise the bear by gently unzipping the tent and remaining calm with slow movements.

Don’t forget to bring the bear spray along with you, in case the bear decides to charge against you.

Keep talking to the bear with a calm voice, stand your ground, and do not make any sudden movements. If you’re in a car, try moving towards it by backing away from the bear. You can also try walking sideways, as long as you never take your eyes off the bear.

Regardless of the advice above, we’ve seen multiple recommendations on keeping still and getting back to sleep, while simply ignoring the presence of the bear completely.

Grizzly bears vs. black bears – fight back or play dead?

If things turn bad for some reason, and the bear becomes aggressive, it’s important to assess whether it’s a grizzly bear or a black bear.

This side-by-side comparison of black and brown/grizzly bear characteristics is the best we’ve come across so far.

This is where your flashlight comes in handy, because as soon as you identify what kind of bear that’s acting aggressively towards you, you know what strategy to use against it.

Brown/grizzly bears: If you’re attacked, lay flat on your stomach and PLAY DEAD with your hands covering your neck and legs spread to make it harder for the bear to turn you over. Keep completely still until the bear loses interest. If it doesn’t lose interest, start fighting back and use anything at hand to hit it in the face.

Black bears: DO NOT PLAY DEAD if you’re attached by a black bear. Instead, fight back by hitting and kicking towards bear’s face, and make sure you keep fighting for as long as possible.

A part of Klik1 Media.